Blog - Latest News
You are here: Home1 / Pure Content2 / Only Money—Deloitte Pays Another Fine And Then Moves On

Money, get back.
I’m all right Jack keep your hands off of my stack.

Don’t give me that do goody good bullshit.
I’m in the high-fidelity first class traveling set
And I think I need a Lear jet.

For Deloitte, the song goes like this: Do the crime, pay the fine, the firm does no time, survive and thrive.

The Public Company Accounting Oversight Board censured Deloitte & Touche LLP yesterday and imposed a $2 million civil penalty against the firm for violating the Sarbanes-Oxley Act and PCAOB rules when it permitted Christopher E. Anderson, a former partner, to perform or continue to perform activities as an “associated person” that were prohibited while he was subject to a PCAOB suspension order.

Anderson was the partner on Deloitte’s Navistar audit engagement, based in the Chicago office. Anderson was the first individual fined or suspended by the Public Company Accounting Oversight Board, barred for a year and fined $25,000 in October 2008 because he “violated PCAOB standards” by agreeing “without a reasonable basis” to accounting decisions by Navistar Financial Corp in 2003 that led to restatements, SEC investigations, delisting and numerous lawsuits including by Navistar against Deloitte. (That lawsuit settled recently on a confidential basis but the amount was rumored to be close to $25 million.)

Anderson is not the only partner responsible for a large audit failure hiding under Mother Deloitte’s skirts. Nicholas Difazio was suspended in 2008 by the SEC, barred for three years from practicing before it as an accountant, for his role as the partner on the Delphi audit failure. (Difazio was even flipped by the SEC after being sanctioned for his negligent audit and used to strengthen the regulator’s case against Delphi executives by saying the executives “duped” him.)

Difazio has yet to be reinstated by the SEC but he’s been working for Deloitte ever since. DiFazio is still a partner in Deloitte LLP, the public accounting firm, leading the firm’s IFRS practice. He advises issuers on IFRS conversion, writes whitepapers, stars in webcasts, and speaks to academics, regulators and issuer groups about the challenges and opportunities of changing accounting standards.

Until this week, you could also find him prominently featured on the Deloitte website. 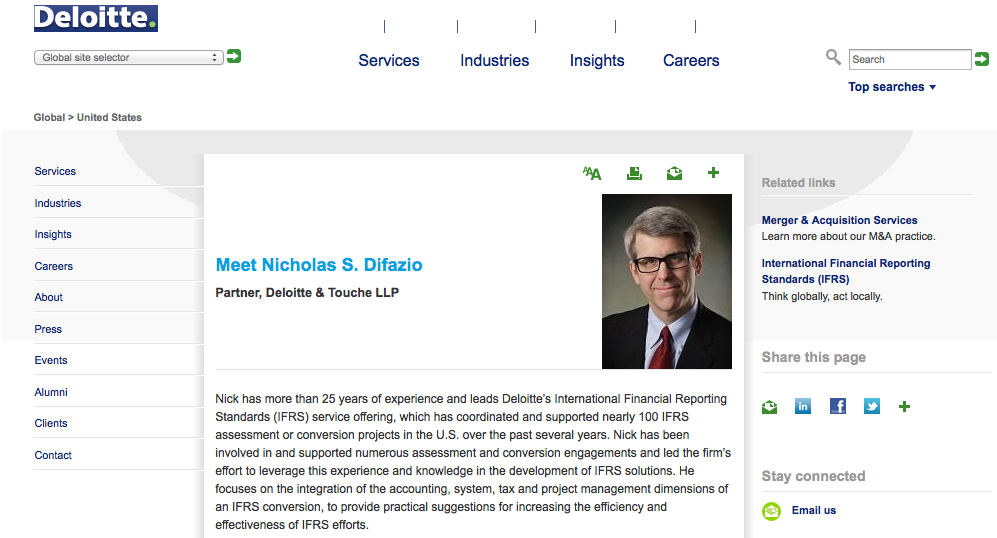 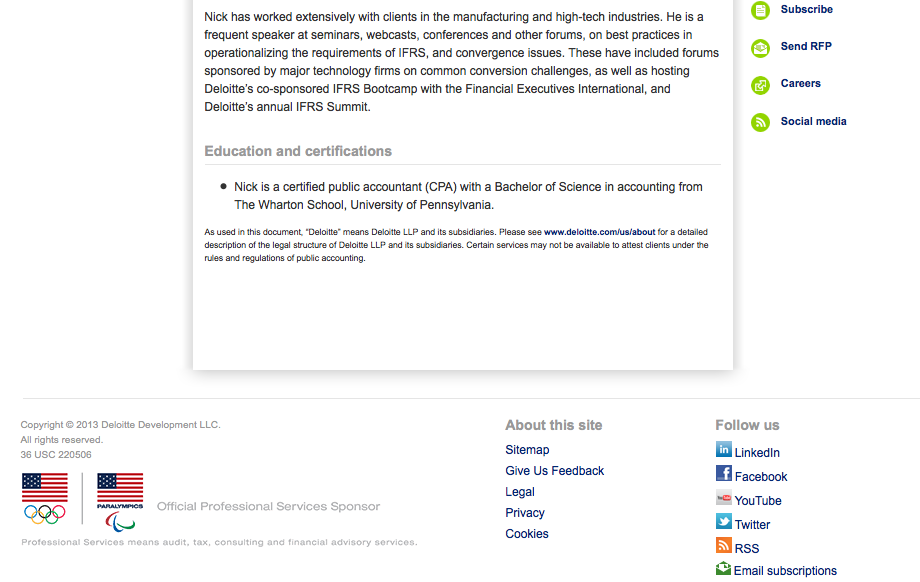 A search yesterday on Difazio’s name on the Deloitte site and on the URL where he was previously found produced a “404” error, information not found.

Perhaps the firm is beginning to clean up its act.

In 2008 when Deloitte was investigated for its role in Navistar’s accounting fraud and engagement partner Anderson sanctioned by the PCAOB, the firm had already paid $50 million in April to the Securities and Exchange Commission for not detecting fraud at Adelphia Communications Corporation, the cable television company. That was, and still is, the largest penalty the SEC has ever levied against an accounting firm. (Deloitte was also the PCAOB’s first recipient of a fine for a large firm, $1 million for mishandling a 2003 audit of Ligand Pharmaceuticals Inc.)

Deloitte lost the most big banking and mortgage audit clients during the crisis and was sued over and over: Royal Bank of Scotland (where Deloitte is still auditor), Bear Stearns, Merrill Lynch, Washington Mutual, American Home, Novastar, Beazer and Taylor Bean and Whitaker.

Deloitte epitomizes the “hand in both pockets”, revolving-door consultant for regulators all over the world. Deloitte audits the US Federal Reserve Bank and BlackRock and BlackStone and is the largest Big Four contractor to the Defense Department and the successors of Blackwater. (That’s a lot of black, no?)

Mark Carney, the new Central Bank of England boss just hired Deloitte to advise on strategic cost cutting initiatives in partnership with McKinsey. That’s in spite of Deloitte’s ignominy as auditor of nationalized Royal Bank of Scotland, auditor of HP acquisition Autonomy, and the firm’s conflict of interests and betrayal of the public trust as auditor of failed MG Rover.

McKinsey will work on a strategic plan examining the BOE’s priorities for the coming years and Deloitte will help conduct a “value for money” review focusing on operations including information technology and human resources, the BOE said today. Both companies were chosen after a competitive tender, it said.

Deloitte was the “independent” foreclosure reviewer under the OCC/Fed consent decree for JPMorgan, even though majority of mortgages to be reviewed for “borrower harm” were from former audit clients Bear Stearns and Washington Mutual and the partner in charge of the JPM engagement for Deloitte was a partner on the WaMu audit.

We know how that engagement turned out…

You may have heard JPM is readying to pay up to $13 billion in a settlement for mortgage fraud to a group of government agencies led by the Justice Department. According to Reuters reports today, $4 billion of the deal, intended to go toward aid for struggling mortgage borrowers, is tax deductible. Another $5.75 billion may go to a group of investors in mortgage-backed securities including asset managers and Deloitte audit client BlackRock Inc.

Deloitte has a culture of non-compliance with regulatory requirements, generally tolerated over and over by the SEC, DOJ and PCAOB, and best evidenced by its escape from public criticism for the Tom Flanagan inside trader scandal. Deloitte claimed its Vice Chairman “duped” the firm. I didn’t buy it in 2008 and I don’t buy it now. Flanagan, in comparison to the recent case of insider trading by a KPMG senior partner, actually traded on the information.

Why didn’t Deloitte see the Flanagan issue earlier? Based on the SEC’s complaint, Deloitte was not aware until, presumably, the SEC started asking their clients a lot of questions. Deloitte didn’t have the process in place that the firms are supposed to have.

Deloitte was also the first Big Four ever to receive a “pass with deficiency” grade on a peer review and the first to have its Part II report publicized by the PCAOB because of stubborn intransigence over acknowledging, let alone fixing, audit quality issues cited by the regulator during the crisis period.

According to Monadnock Research, consulting revenue grew four times as fast as audit revenue at the Big Four last year. Consulting never stopped at Deloitte after Sarbanes-Oxley restrictions on services to auditors were enacted in 2002. A $2 million fine to the PCAOB, combined with $10 million to NYDFS, $17 million to UK regulators for MG Rover and up to $1 billion, estimated, for the Taylor Bean and Whitaker audit failure, is still only pocket change for Deloitte, a firm that reported global revenues of $32.4 billion for fiscal 2013.

Deloitte is the best example in the Big Four of how a large consulting business corrupts an audit firm, obscures the auditors’ public duty and ruins their professional skepticism, squashes whatever shred of independence any of the partners or professionals may still shoot for, and will soon destroy any remaining vestiges of integrity for the accounting profession.

Deloitte did not respond to an email request for comment on the recent disappearance of Nick Difazio from its website.

Running At You – The Much Feared “Shorts”
Housing Problems: Where To Get Help
Not That Satisfying: SEC Slams KPMG For Independence Violations
The Big 4 And Pending Litigation – Can They Fight The Law And Win?
New At Forbes Online: The Precarious Financial Position Of The New York Times
2011 Loeb Award Application: Blogging
4 replies