On Friday January 28, 2011, I moderated a briefing for the New York State Society of Certified Public Accountants (CPAs) on the whistleblower provisions of the Dodd-Frank financial services regulatory reform bill.  This was a special audience, in my opinion, because it consisted of CPAs and those who support and work with them. 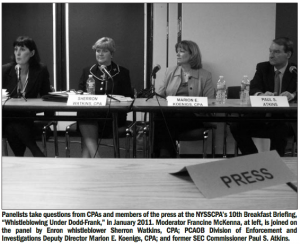 Here’s a blurb about the event in the Society’s annual report:

The four breakfast briefings held during the 2010/11 fiscal year were well attended by NYSSCPA members, nonmembers and the media, and featured expert panelists on topical issues. For the Breakfast Briefing on “Whistleblowing Under Dodd-Frank,” Enron whistleblower Sherron Watkins, CPA, was a featured panelist, in a session that received widespread attention by the media. Moderator Francine McKenna of Forbes, and author of the blog re:The Auditors, live-tweeted the event for her significant Twitter following of more than 6,600. Panelists and moderators for breakfast briefings were recruited from regulatory bodies, firms and the media.

I’ve written at Forbes about the event, including some quotes from Sherron Watkins that made news.

Enron Whistleblower: I Would Have WikiLeaked Fox News Houston

Breakfast Briefing on Whistleblowing Under Dodd-Frank

Note: This event is free, and CPE is not available.

This is the tenth in a series of NYSSCPA Breakfast Briefings.  (Other briefings featured the Presidential Tax Foru,; Madoff and Taxes, an Economic Update, Key Washington Tax Issues and the Financial Reform Law. All Breakfast Briefing webcasts are available on the NYSSCPA home page at www.nysscpa.org.)

For other questions, contact Lois Whitehead, NYSSCPA Public Relations Manager at 212-719-8405 or lwhitehead@nysscpa.org.

Barney Less Than Frank About Auditor Reform
Journalists’ Obligations In The Shareholder Value Maximization Debate
The Question of the KPMG Whistleblower
@MarketWatch: IEX Becomes an Exchange
A Summary of Writing on the “Independent” Foreclosure Reviews and the AG Mortgage Settlement
Dear PCAOB Board: Your Job Is To Serve And Protect Investors
3 replies