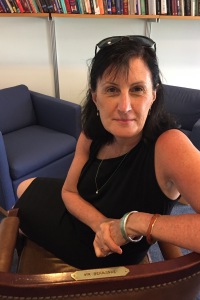 Francine McKenna is a Lecturer at The Wharton School, The University of Pennsylvania. McKenna is also an award-winning writer and teacher who migrated to investigative journalism after a career in the public accounting industry. She now teaches full-time, writes, and comments on accounting, audit, internal audit and corporate governance issues and challenges at public and pre-IPO private companies. Her work has been cited in testimony before the U.S. Congress and in comment letters to regulators as well as cited in other academics research with respect to these topics. She authors the newsletter, The Dig.

McKenna spent more than 20 years in public accounting and consulting, including stints at KPMG Consulting and PwC and as the first female managing director for BearingPoint in Latin America. She began in internal audit at Chicago’s Continental Illinois National Bank and Trust. More recently, McKenna has been an investigative reporter for more than 15 years for leading financial publications, including most recently as the Financial Transparency reporter for Dow Jones/MarketWatch and as a featured columnist in The Financial Times, The Wall Street Journal, American Banker, Accountancy Age, Accountancy Magazine, Forbes and Barron’s, among many other publications. McKenna began her journalism career with her own blog, reTheAuditors.com, in 2006.

McKenna has been an adjunct professor at American University, Ohio State University and Baylor University. She is a frequent guest lecturer and speaker at universities, conferences and other forums and was honored as the Dreier Chair in Accounting Distinguished Speaker at Loyola Marymount University in Los Angeles, CA. She was twice a finalist for UCLA’s Gerald Loeb Award for Distinguished Financial Journalism, for reTheAuditors.com and for her magazine articles at Forbes. She was a member of the inaugural class of Journalism Fellows at the Stigler Center of the University of Chicago Booth School of Business.

McKenna is fluent in Spanish and familiar with Brazilian Portuguese.