Hodge accused Nicholson of lying to the committee.

You know that you’re on your “back foot” when the first words out of your mouth are a denial that you lied to a legislative committee under oath. (PwC better hurry up and get on the good foot.)

In a series of fractious exchanges on Monday, the committee’s chair, the Labour MP Margaret Hodge, said: “We’ve asked you to come back to see us because we’ve reflected on the evidence that you gave us on 31 January 2013, and tried to relate that to the revelations around the Luxembourg leaks that have been in the press. I think I have a very simple question for you: did you lie when you gave evidence to us?”

Nicholson responded: “I didn’t lie and stand by what I said.”

A key issue was whether PwC had sold the tax schemes or clients bought them. When it comes to allegations of tax abuse, there’s a world of difference. 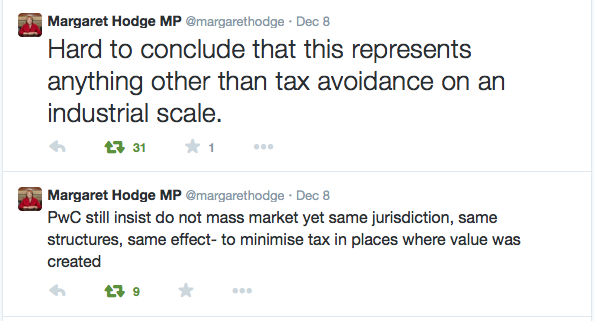 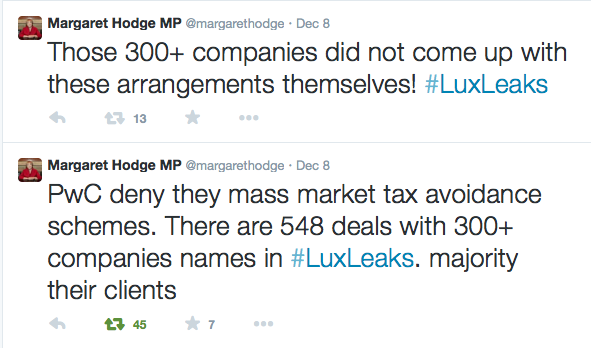 It’s important to recall that the overall allegations against PwC are even worse when you consider that more than 100 of the 300+ companies are PwC’s audit clients. I wrote in Medium.com after the ICIJ investigation came out that this systemic violation of auditor independence requirements should be immediately investigated by the SEC and PCAOB. (PwC has been answering a lot of questions about its work lately. The Wall Street Journal’s Michael Rapoport reported that the PCAOB is now looking into PwC’s tax advice to Caterpillar for auditor independence violations. The schemes were the subject of a hearing held last April by Senator Carl Levin where PwC partners made some embarrassing admissions.)

It’s true that the loophole for auditors and tax advice left in SOx is big enough to drive your entire diverse staff through in a rainbow colored double-decker bus. However, PwC and others crossed the line by designing and mass-market selling speculative, aggressive tax avoidance schemes to audit clients, too.  That’s prohibited by SOx and by general auditor independence principles, for sure.

From my column at Medium, “Luxembourg Tax Document Leak Leaves PwC and its Multinational Clients Vulnerable”:

PwC is also asking for big trouble from the SEC and PCAOB in the US by providing “novel and debatable tax strategies and products that involve income tax shelters and extensive off-shore partnerships or affiliates” to its own audit clients.

PwC audit clients make up a very large portion of the 340 Luxembourg tax advice clients on the ICIJ list. PwC must comply with US SEC auditor independence rules under the Sarbanes-Oxley Act of 2002 for US-listed audit clients.

PwC sold, and the audit committees approved, non-audit tax services for “transaction[s] initially recommended by the accountant, the sole business purpose of which may be tax avoidance and the tax treatment of which may be not supported in the Internal Revenue Code and related regulations.”

That’s prohibited by the Sarbanes-Oxley Act of 2002.

To PwC’s defense that the documents were “stolen”, Hodge had this to say:

Urging PwC “to just clean up your act”, Hodge, who has led complaints about multi-nationals’ tax habits, said its Luxembourg operation seems like “a murky underground pool with dodgy operations”.

“You talk about material being stolen from PwC. In my view you had whistleblowers and you will continue to have whistleblowers for as long as you take this attitude. I will invite them to write to me on a confidential basis,” she said.

“I can’t think of a company who would want to do business with you if they think they are going to end up in the New York Times or the Guardian because you are simply indulging in scams,” she declared.

To PwC and their clients’ defensive argument that the schemes were legal, well, we shall see:

I wrote a more detailed description for Medium.com of the tax scheme PwC devised for audit client AIG, while the company was majority-owned by the US government during the financial crisis!

The US government didn’t take advantage of the financial crisis and its enormous conflicts to rotate auditors at any of the bailed-out companies it nationalized. All of the companies the US government controlled for a time — GM (Deloitte), Citi (KPMG), Freddie Mac (PwC) and Fannie Mae (Deloitte) — use the same auditors that missed the issues that led to the crisis and the same ones that neglected to provide a “going concern” warning to investors or taxpayers before failure was imminent.

The US Treasury and the Fed looked the other way when AIG hired PwC to implement tax avoidance strategies. PwC had the unmitigated by government oversight nerve to sell tax avoidance schemes to its beleaguered, teetering on bankruptcy client AIG that took even more money out of US Treasury coffers.

But that’s not all!

Microsoft’s Skype is also mentioned along with a few others. 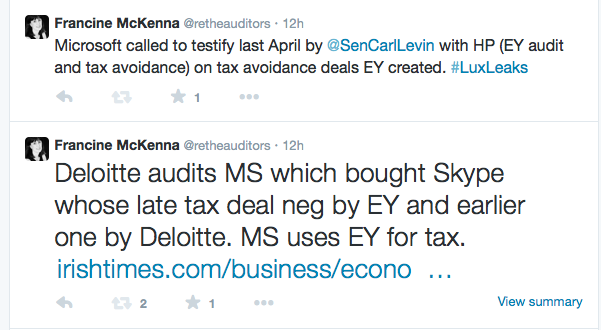 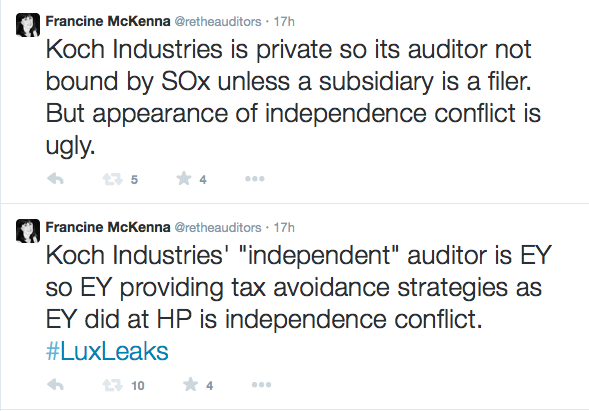 This story is not going away for PwC. The challenge is for the PCAOB and SEC to do more than one-off investigations like the one requested by Senator Levin regarding PwC’s marketing of tax schemes to audit client Caterpillar. Unfortunately, if the SEC and PwC took on the widespread systemic abuse of auditor independence and the public trust evidenced by just PwC’s mass marketing of “tax avoidance on an industrial scale” to its audit clients alone, the implications would be much more serious than the individual fraudulent tax fraud that almost brought down KPMG in 2005.

Since the US and UK government have an implicit “too important to indict, too few to fail” policy with regard to the Big Four audit firms, regulators and legislators must take dramatic action to enforce laws already on the books and close down the  “murky underground pool with dodgy operations” immediately.

When Auditors Get Mixed Up In M&A, Smaller Clients Get Hurt
They Weren’t There: Auditors And The Financial Crisis
Guest Post: Is Assurance Required For XBRL- Based Financial Reporting?
The Legacy of Arthur Andersen
Auditing Standard 5: How Now, Brown Cow?
PCAOB Standing Advisory Group Meeting – Baby Steps, But Important Ones

Deadline December 15: Support This University of Notre Dame Accounting Grad... Duped By Fake Documents? All In A Day’s Work For Some Journalists
Scroll to top