Blog - Latest News
You are here: Home1 / Featured2 / Amazon and taxes, oh my! 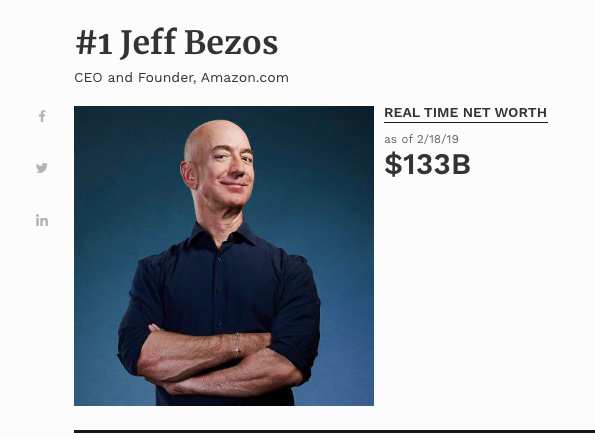 Jeff Bezos has bigger problems than the Queens pull-out and criticism of Amazon’s taxes. He may want to wipe that smug look off his face.  Photo from Forbes.

Amazon backed out of its selection of Queens, NY as a location for a new headquarters this week.  It was a big story, revolving around new Queens/Bronx Congresswoman Alexandria Ocasio-Cortez for some strange reason.

But I was not focused on that story, although I have an opinion on it that I share with Professor Luigi Zingales of The Stigler Center at the University of Chicago Booth School of Business.

When companies compete for customers, they have to offer better products or lower prices. They are forced to innovate and improve efficiency in production. In economist lingo, product market competition is not a zero-sum game (my gains are equal to your losses), but a positive-sum game (my gains exceed your losses). By contrast, corporate competition for state subsidies is a zero-sum game. Amazon is not going to be more productive in New York than in New Jersey –it will only pay fewer taxes. If companies are successful in pitting one state against another, they will end up paying no state taxes. As a result, the economy will not be one iota more efficient, and the rest of us will end up paying more taxes to make up for the revenue shortfall.

I was focused on Sen. Bernie Sanders’ and Rep. Alexandria Ocasio Cortez’s campaign against Amazon for “paying $0 federal taxes.” Unfortunately this trope was picked up by all kinds of outlets and repeated verbatim with no one looking into whether or not it was actually correct.

It was not entirely correct.

Amazon riled up the left for not paying federal taxes — and it’s in a position to offset future profits, too

A close look at Amazon’s finances shows the Vermont independent and Bronx Democrat will have more to get upset about, because the internet giant has billions of dollars in various credits it could apply to offset future taxes as well.

As of Dec. 31, Amazon had federal operating loss carryforwards of $627 million, foreign balances of $7.8 billion, and state balances of $919 million.

Net operating loss carryforwards are created when a company’s deductions for the year are more than its income. Companies can use a federal tax loss carryforward by deducting it from their income in another year or years.

I called this move before:

Amazon CEO Jeff Bezos claims the company eschews profits so “free cash flow” can drive growth. Investors can’t see what cash is spent on, but do see a volatile stock price and no dividends. Bezos’ actual strategy is much more mundane: skim the cream and leave nothing for the tax man.

Recently Benedict Evans, of VC firm Andreessen Horowitz, suggested that it’s not as important whether consistently profit-poor Amazon and its CEO Jeff Bezos can “capture the future” but instead, “How long are you willing to wait?”

Evans says Amazon, the granddaddy of growth and market share over short-term profits, is brilliant for putting every last bit of earnings back into its business. Evans thinks “someone at Amazon has the job of making sure that each quarter, this nets out to as close to zero as possible, at least as far as net income goes.” And Evans doesn’t seem to see any problem with someone doing that.

I agree with Evans’ conclusion. There are few other ways to achieve consistently equal revenue and expense lines than by hands-on management of the results. CEO Jeff Bezos wants Amazon to be the biggest and best retail organization in the world. But I believe Bezos and his team massage the numbers each quarter to minimize profit for a bigger reason.

Amazon reports little or no profit because Jeff Bezos hates paying taxes, on his own income and Amazon’s.

Servicing The Mortgage Industry: An Update
Jamie Dimon (And JP Morgan) Besieged
Big Four Auditors and Jury Trials: Not In The U.S.
Still No Accountability: An Update On The Goldman Sachs Facebook Deal
University of Chicago Booth Capital Ideas Magazine: Two New Articles
One Of These Things Is Not Like The Others: How Goldman Sachs and Lehman Brothers Hid The Ball From Investors

Do Investors Care At All About Audits Anymore?