Last week was a very busy week for me at MarketWatch. Here’s the first of four stories I filed the week of June 20.

Word got out early that the SEC would approve IEX’s application to become a stock exchange on Friday the 17th. As usual, the leak traveled to the big media outlets earlier that week and then the rest of us waited for announcement from the SEC all day.  As a total noob, I was expecting a public meeting and a vote, even thought there are currently only three SEC commissioners.  After not seeing any notice of a pubic meeting on the SEC’s site or getting any embargoed copies of the staff recommendation document, the actual approval document or the statements by the Commissioners, I asked Twitter what was going on.

Fortunately, my handy dandy colleague Dave Michaels at the WSJ knew the scoop. 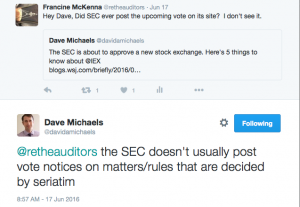 What is seriatim? In the SEC rulemaking context it means, from the persecitve of the Office of the Secretary of the SEC:

The Office of the Secretary schedules Commission meetings, administers the Commission’s seriatim — the process by which the Commission takes collective action without convening a meeting of the Commissioners — and duty-officer process, and prepares and maintains records of Commission actions.

The actual announcement from the SEC came out at nearly 8 pm Friday night EST and then there was an off-the-record media backgrounder conference call.  My colleague at the WSJ had to file something right away.  (Note the time stamp.)

My full story, filed Monday after a lengthy interview with the IEX CEO Brad Katsuyama, is here.

And here’s an excerpt, with some unique info I was proud to be able to report exclusively.

In an interview on Monday with MarketWatch, IEX CEO Brad Katsuyama said he is committed to continuing to make the majority of the company’s revenue from trading fees.Katsuyama says market share for the major exchange groups is static, because they don’t differentiate on service and, therefore, have to pay as much in rebates as legally possible for the trading volume they get.

“We don’t pay for orders so we have to earn the business in other ways. We are a service provider. We have to provide the best service to investors,” he said.

Katsuyama continued to rule out the other common exchange revenue sources—selling market data and charging for faster connectivity. IEX delays its proprietary market data feed uniformly to all IEX users. “Our market data feed is free. Some have suggested we charge at cost for data. It’s not part of the plan.”

In its application IEX stated its intent not to pursue “maker-taker” rebate pricing and instead offer only flat transaction fees. The approval of IEX’s application, tied up for 270 days was in large part driven by controversy over its proposed trading system—specifically, its “Point-of-Presence” or POP and “coil” infrastructure, more commonly referred to as IEX’s “speed bump.” There was also quite a bit of comment for detractors about the way IEX originally proposed to provide outbound trade routing services through its affiliated routing broker-dealer.

In the end IEX revised its proposal with regard to the outbound routing of trades to its broker-dealer, and the SEC as well as critics were satisfied. And the SEC noted in its approval that speed bump applies to all IEX users equally, and cannot be bypassed, for a fee or otherwise.

IEX also plans to wait on getting into the listings business, another fee generator for the traditional exchanges. The majority of its regulatory functions will be outsourced to Finra, the industry regulator, an approach also used by BATS Global Markets BATS, -3.48% Taking on listings would require additional regulatory compliance activities.

A spokesman for Finra did not respond immediately to a request for comment on its pending contract with IEX.

IEX is running a lean operation right now, Katsuyama explained, with about 70 full-time employees. “We plan to add about 10-15 more leading up to the launch,” said Katsuyama, which is expected to be sometime in mid-August. If anyone doubts IEX can succeed with this model, Katsuyama says it’s already doing that. “We been profitable for the last year,” he said.

The SEC vs. The PCAOB and Jim Doty: Impasse or Détente?
Nowhere To Hide: Ernst & Young Looking At More Civil Liability For Lehman Failure
Big Four Auditors and Jury Trials: Not In The U.S.
New In Chicago Booth’s Capital Ideas Magazine: Big Four To Big Three
Sarbanes-Oxley Doublespeak
They Weren’t There: Auditors And The Financial Crisis