On Friday at MarketWatch I gave readers a little preview of a speech PCAOB member Jeanette Franzel gave at an all day COSO workshop on Saturday at the AAA Annual Meeting in Chicago. I wanted to reiterate what I read and what some of you heard and add a bit more for emphasis.  This is important analysis by the PCAOB and vitally important information for investors and those in a policy and regulatory role.

You should shudder over the sheer nonsense of it all.

Franzel’s  speech on Saturday at the American Accounting Association annual meeting, in part, responds to criticisms made by the U.S. Chamber of Commerce in May that I wrote about previously.

In a letter to the Securities and Exchange Commission and the Public Company Accounting Oversight Board, the Chamber complained about unintended consequences of the PCAOB auditor inspection process that Chamber members believe are imposing new “burdens” on business. The Chamber called on the SEC and PCAOB to meet with its members to discuss their concerns.

The Chamber thinks that the ICFR work has gotten out of hand and is costing companies more money with little to show for it. Franzel, in her speech, says that PCAOB research concludes that fees are not higher without good reason for it.

Other issuers simply may not be well-prepared for their audits in that their controls are not as strong as they should be and/or those controls are not supported by strong documentation and evidence. These situations can also lead to more audit costs, as well as more costs to the issuers if controls need to be improved.

The take-away from this analysis is that the audit fee data from the past four years for all issuers, including those with ICFR opinions, show relatively stable increases in the median percentage change in fees since 2011.  And when issuers do report large changes in their audit fees, it is most likely related to factors other than ICFR audit work.

On the other hand, Franzel told the AAA audience that despite the fact auditors have been making some progress in improving their audits of internal controls over company financial reporting, the PCAOB continues to see auditors having trouble meeting the standards and some firms still have significant work to do to meet the ICFR audit requirements and PCAOB auditing standards. (That’s a lot like how the PCAOB sees auditors making the same mistakes over and over again in key risk areas and how the audits of broker-dealers have been getting much worse not better in the four years the pilot program intended to develop a permanent inspection program has been going on.)

I was sadly not surprised to hear that material misstatements and restatements did not match up with adverse opinions on ICFR.

The PCAOB began putting significant focus and emphasis on audits of ICFR in its 2010 inspections—a focus that has continued since then. 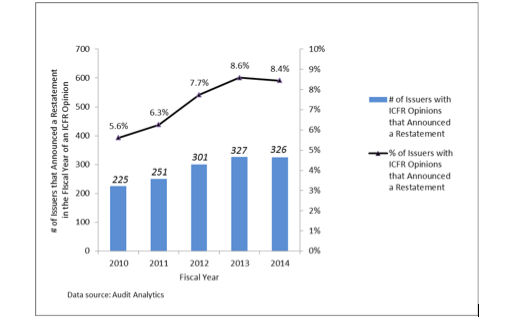 On an overall basis, the rate of restatements (figure 2) exceeds the rates of adverse ICFR opinions (figure 1) for those companies that receive ICFR opinions.

When looking more specifically at the companies with financial restatements, the data show additional complexity. The vast majority of companies restating prior year financial statements received a “clean” audit opinion on ICFR in the year in which the restatement was announced. Figure 3 below shows that in 2014, more than 80 percent of such restating companies received an ICFR opinion from their auditor that their ICFR was effective in the year that the restatement was announced.[2] This reflects an increase over recent years.

Figure 3: ICFR Opinions of Issuers that Announced a Financial Restatement 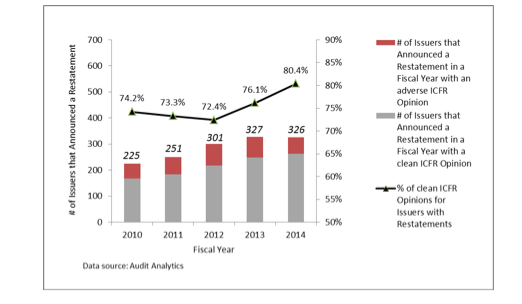 [1] Source: Audit Analytics. The number of announcements of a restatement made by issuers presented in Figure 2 includes non-reliance notifications filed by an issuer on Form 8-K and disclosure of a restatement identified in the issuers’ periodic filing.

[2] Depending on the timing of the discovery of a misstatement in the financial statements or the announcement of a restatement, in some cases the issuer may be able to effectively remediate any related material weaknesses that could result in a clean audit opinion on ICFR in the year of the announced restatement.

[3] Some academic research, although based on data from earlier years, seems to support this observation. See, e.g., Rice, Sarah C., and David P. Weber, “How Effective is Internal Control Reporting Under SOX 404? Determinants of the (Non‐) Disclosure of Existing Material Weaknesses,” Journal of Accounting Research 50.3 (2012): 811-843.

But what I did not know is that auditors actually went back and revised those blown ICFR opinions to cross their “Ts” and dot their “i”s and basically paper over their mistakes, their audit failures.

“Notably,” Franzel says, “a number of these restated opinions arose during or after a PCAOB inspection.”

Try to wrap your head around that.  The tail is wagging the dog. Of what possible use to the average, even the sophisticated, investor is a restated ICFR opinion by an auditor that is good for less than a year?  It’s clearly just a whitewash by the firm to limit the ability of anyone but the sharpest observer to catch their error and call them on it with a lawsuit or some other negative consequence.
When I spoke to Franzel she said that, although it may not be obvious that a firm has suffered any consequences of such a major failure, rest assured, she assured me, individual partners do hear about it.
Ok, then.
That’s one more reason why it would be really nice to know who the heck these lead engagement and quality assurance partners are on these engagements and whether or not they actually incurred any firm level or regulator level disciplinary action for their failures.  There’s no transparency about whether or not the system is working and incompetents are being flushed out.
There are some proposals about this out there, right?
For example, what about the lead engagement partner and quality assurance partner on JP Morgan’s audit at PwC?  You may recall I wrote at Forbes that the bank did actually admit to a material weakness in internal controls over financial reporting for its  “Whale” trade losses in 2012.

On July 13, 2012, JPMorgan management, not PwC the auditors, reported that a material weakness existed in its internal control over financial reporting as of March 31, 2012. The bank had finally acknowledged that the valuation controls for the synthetic credit portfolio managed by CIO were broken. Management also concluded that its disclosure controls and procedures were ineffective at March 31, 2012.

First quarter 2012 results were formally restated, resulting in an additional loss of $459 million.

Franzel explains in her speech a footnote:

[19] Depending on the timing of the discovery of a misstatement in the financial statements or the announcement of a restatement, in some cases the issuer may be able to effectively remediate any related material weaknesses that could result in a clean audit opinion on ICFR in the year of the announced restatement.

By the way, the SEC, although it did join in an enforcement order/settlement with JP Morgan for the “Whale” fiasco, and did mention Sarbanes-Oxley in that order, it did not actually cite the bank for any Sarbanes-Oxley violations.  In particular, although there was an actual restatement for a material error based on misconduct with an 8-K and everything including correction of prior period data, the SEC never insisted upon CEO and CFO incentive comp clawbacks under Section 304. I wrote:

Sarbanes-Oxley Section 304, forfeiture of certain bonuses and profits, is the clawback rule. Sarbanes-Oxley clawbacks must be preceded by a restatement and only impose clawbacks on the CEO and CFO. (Dodd-Frank clawback rules also require a restatement as a trigger, expand on Sarbaes-Oxley 304 by require companies to implement clawback policies, and allow for incentive compensation to be confiscated from a wider group of executives.)

The Wall Street Journal reported that Achilles Macris, Javier Martin-Artajo and Bruno Iksil were terminated with no severance pay. Martin-Artajo  and another trader, Julien Grout, have now been indicted for the mismarking of the trades that led to JPM’s  restatement of its 1Q 2012 results. JPM said the amount clawed back, under bank policies, from each person represents about two years of total annual compensation. The recovered sums include restricted stock and canceled stock options grants.

Ina Drew “offered” to give up “a significant amount of past compensation”, according to the WSJ who quoted Jamie Dimon at the time. Dimon said it is equivalent to the maximum clawback allowable under the bank’s policies.

Dimon and Braunstein, however, have not given back any 2012, 2011 or 2010 incentive compensation and the SEC hasn’t yet forced them to do so. A recent indictment of two of the two traders implies there was misconduct.

At a minimum, under Sarbanes-Oxley Section 304, the CEO and CFO, whether “blameless” or not, must reimburse the company for any bonus or other incentive-based or equity-based compensation received during the 12-month period following the first public issuance or filing and any profits realized from the sale of securities of the issuer during that 12-month period if the company is required to prepare an accounting restatement, due to material noncompliance as a result of misconduct.

All this corporate executive worry about the new Dodd-Frank clawback proposed rule is unfortunately just theatrics.  It not only is an impotent rule based on its huge loophole for “stealth” restatements but it is as unlikely to be enforced against any big shots as the SOx version was.

Update: KPMG: Whittle and Holder Plead Guilty
Forbes Magazine: Lying With Numbers
A Need for Transparency In Financial Staffing: A Guest Post From Dan Gaffney
Auditor Independence and Management Consulting – Deja Vu All Over Again
Auditors Diss US Regulators Regarding China
Auditors Can Be Whistleblowers: A Guest Post On Recent Developments In Whistleblower Case Law
1 reply

SEC News at MarketWatch The NYDFS Case Against Promontory and the Bigger Problem of Big Four Bank C...
Scroll to top