News broke on September 2 that a firm, made up of ex-Arthur Andersen tax partners and called Wealth and Tax Advisory Services LLC, bought the Andersen portion of the Arthur Andersen name from what’s left of that firm and will now call itself Andersen Tax.

The news, as you would expect, garnered much media attention. It says something—but maybe not what the firm’s partners think— that so many years after the destruction of Arthur Andersen by criminal indictment—twelve years—so many people care. Every major media and trade publication as well as several blogs wrote about it. I am quite sure, however, that this attention does not mean the general public has forgotten what the Andersen name stood for.

The US Editor at Reuters Breakingviews, Jeff Goldfarb, asked me to write an OpEd about the name change for that site.  He may have seen this tweet:

Or maybe this one:

Thanks for the link @qz and @jkaraian on AA story. I disagree but you summed up situation very well. http://t.co/SHZBMF1wKo — Francine McKenna (@retheauditors) September 3, 2014

Many others wrote about the name change, including John Karaian at Quartz, mentioned above, who linked to my blog and Professor Mike Shaub at Texas A&M, who agrees with me. Mike regrets feeling bad more than I do but he has to stand in front of students every day and encourage them to join the profession.

Mike Cohn, Editor in Chief at Accounting Today, writes a LinkedIn Influencer column that adds some details and leaves the question about whether this is a good idea for you to answer.

Finally, Jim Ulvog sums up the coverage this way:

Partners in the WTAS firm probably don’t care one bit that Mike Shaub, Francine McKenna, me, and lots of other people, maybe including Barbara Toffler, think poorly of the Andersen name. We aren’t potential clients.

The WTAS firm, now Andersen Tax, reportedly had about $150M of revenue last year. If just 4% or 8% of CFOs around the US and Europe think highly of the Andersen name, that means there is a humongous market for the new firm.

And they just got millions and millions of dollars of free, high visibility advertising this week.

I decided to go to former Andersen professionals and ask them.

Most Andersen alumni have moved on. Many are part of other global audit firms, consulting firms and successful spinoff firms like Protiviti, a division of Robert Half where about 40 of the original day-one Andersen alumni are still with the Chicago office. That’s according to Jim Pajakowski, a former partner in Andersen’s Chicago Risk Consulting group and now an executive vice president of global services for Protiviti, still based in Chicago, one of the firm’s largest offices.

I live in Chicago. It’s difficult to throw a rock down Wacker Drive and not hit a few Andersen alumni. Andrew Baker runs Clovis, a strategic communications firm in Chicago. He was Manager of Creative Communications for Andersen. He worked on its global advertising campaign in 2001, right before the Department of Justice  punctured Andersen’s little orange ball with a criminal indictment.

Baker is quoted in my Reuters Breakingviews column, which inspired him to write a blog post about the name move by the former WTAS now Andersen Tax.  He calls it, “Andersen. What A Broken Brand Looks Like”.

Seriously, the only folks likely to have much lamented the demise of Big 6 accounting firm Andersen were partners and employees—and not even all of those.

So who’s the best candidate for writing a panegyric? Anyone?

How about the partners at the newly dubbed Andersen Tax in San Francisco, which negotiated for the rights to use the Andersen name with (you guessed it) the ghostly wraith of Arthur Andersen that still legally exists.

Life is long, as Salman Rushdie says, in his great early novel of partition and parturition: Shame is like everything else; live with it for long enough and it becomes part of the furniture.

Take it from someone who knows.  The firm may last but the name change is a big waste of money according to Baker.

However you feel about the rightness or wrongness of the DOJ’s action toward Arthur Andersen in 2002, whether a new entity that deliberately adopts the Andersen name can overcome the now defunct firm’s negative history and its tarnished image remains problematic.

It will take work. It will take more time than I think the partners there appreciate. And the new firm could become a laughing-stock. Speaking personally, a change from WTAS to AndersenTax reminds me of the (probably apocryphal) country music song, “From the Gutter To You Ain’t Up.”

Here’s a firm debuting a new brand that’s on its homepage crowing about being “best in class” (it says it so often I found it annoying), and believe it or not, a direct reference to “Think Straight, Talk Straight”—the very mantra that Arthur Andersen grew too fond of to self-critique, believing its own mythos and failing to correct systemic internal problems that promoted profit over integrity.

Others are more sanguine, specifically because of who is leading the Andersen Tax firm, CEO Mike Vorsatz.

Don’t count the firm or its CEO, Mark Vorsatz, out, they said. One, now at another firm he joined after Andersen, told me “Mark’s sort of an Andersen legend. He made partner in six years. Regularly worked 1,000 hours plus of overtime as a manager. He wrote so much he had two secretaries.”

But don’t forget about the infamous Andersen ego, the stubborn arrogance that kept the firm’s leaders from negotiating anything but an indictment, as its fellow global audit firm KPMG knew to do a few years later. Vorsatz ““is the most motivated person I’ve ever met, and not afraid to ruffle feathers when he thinks he’s right.”

I asked Andersen Tax for a comment and they were kind enough to provide a statement from CEO Mike Vorsatz, which I did not get into the Reuters column before it went to print.

I am reprinting it in full here:

“This has been a very thoughtful and deliberative process.  We’ve been considering this change since 2002.  A group at Arthur Andersen tried to put together a tax-only firm but the firm was dissolving too quickly.  A few years later, we were approached by a group of former partners who wanted to pursue an Andersen concept but we were owned by HSBC at the time and it was not feasible.  As part of our global expansion, we knew we needed a common identity.  After determining there were some impediments to using the WTAS name outside the U.S., the logical name was ‘Andersen’ because it best represents our values.

We believe that Andersen originally represented an organization that was based on quality, integrity, stewardship, transparency and providing best-in-class solutions. We selected the name “Andersen” because we believe it represents those qualities.  Independent research demonstrates that the Andersen name remains recognized and respected around the world.

I’ve been enthusiastic about this from the start. While there may be comparisons made with the past and the faults of a very few, we’re focused on tax services and our clients are our top priority. And the feedback we’re already getting from the business community has been overwhelmingly positive.”

You can read my column, “Arthur’s ashes”.

A side note:
Some former Andersen partners were surprised to see a reference in my column at Reuters to a tax shelter case that WTAS, now Andersen Tax, inherited from its old firm. They seem to be in denial that the old Andersen had ever played the tax shelter game, believing all the other large firms did and KPMG suffered near death as a result, but not Andersen.
The firms only tell them what they need to know.  Even now, many Big Four partners know very little about their firms’ litigation issues, partner matters and especially non-local threats and worries unless they hit the papers. Then they discount those reports, too.
With regard to Andersen and tax shelters, well, the firm was no angel.
A report prepared in 2003, U.S. Tax Shelter Industry: The role of accountants, lawyers, and financial professionals, Four KPMG case studies: flip, opis, blips, and sc2, R e p o r t prepared by the minority staff of the Permanent Subcommittee on Investigations of the Committee on Governmental Affairs, United States Senate, focuses on KPMG but mentions Andersen with regard to serial shelter opinion writer law firm Sidley Austin Brown and Wood: 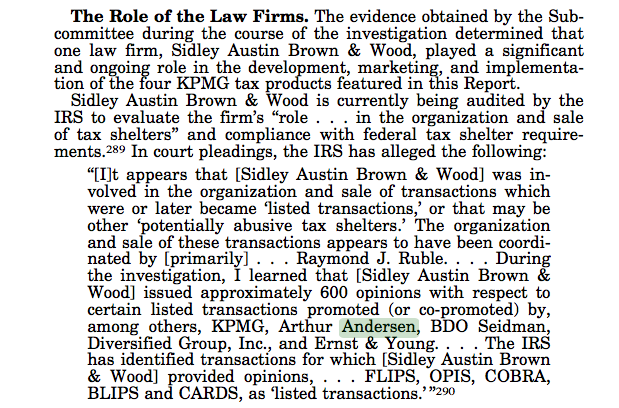 A book,  Confidence Games: Lawyers, Accountants, and the Tax Shelter Industry by Tanina Rostain and Milton C. Regan, Jr.,  goes into more detail about Andersen specifically. The case I mentioned in Reuters Breakingviews is still going on and involves a client of both old and new firm.  Others may have settled by now.  Andersen was as involved in tax shelter promotion as the others but the demise of the firm put its potential culpability out of view of everyone but the IRS and the alleged victims. 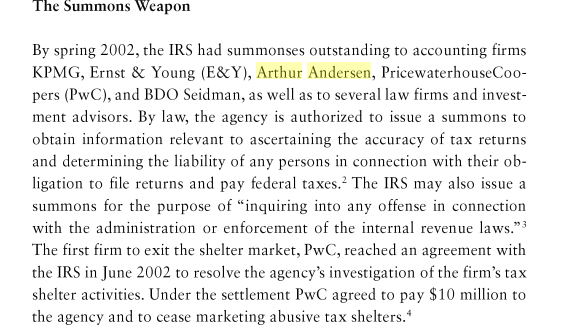 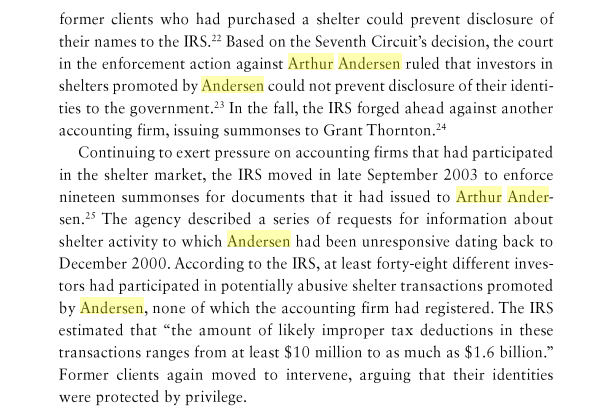 You can also read some of my older posts about Arthur Andersen.

The Legacy of Arthur Andersen, from October 2006.

Auditor Independence and Management Consulting – Deja Vu All Over Again, from October 2006.

Another good source on Arthur Andersen is Chicago’s own Jim Peterson, who used to be a lawyer for the firm.

Congress Looks at the Fall of Lehman Brothers: Was it a Sequel to Arthur Andersen?

McKenna Covers The Berkshire Hathaway Annual Meeting
TBW Plan Trustee v. PwC: A Look at What Led To It and What’s Next
In Pari Delicto: Are Auditors Equally At Fault In The Big Fraud Cases?
2011 Loeb Award Application: Blogging
2009 Capital Markets Summit: The US Chamber of Commerce
Auditing Standard 5: How Now, Brown Cow?
2 replies