Last March I wrote about the Big Four, in particular Deloitte, infiltrating the news media by sponsoring paid content in publications like the Wall Street Journal. Now Deloitte, and PwC, are borrowing even more media credibility by co-hosting conferences with major news organizations.

If we can’t trust the journalists to sort out who’s telling the truth and who’s just selling you, who can we trust?

Deloitte will co-host the FT Global Pharmaceutical and Biotechnology Conference: New Businesses, New Markets on December 3-4 2013 at the InterContinental Park Lane in London.

This is not just a typical major conference sponsorship with veto power, like the situation I went through with the Ethics and Compliance Officers Association Conference. This is a full-boat co-host deal that comes with the ability to drive the agenda, showcase your firm’s leadership, and lock competitors out of speaking slots. All of the big name pharmaceutical companies will speak as well as some global not-for-profits and government healthcare organizations. There are no speakers from the other Big Four public accounting/consulting firms or other consulting firms that compete with Deloitte. All of the Big Four firms did send attendees last year, however.

Talk about paying for prestige and the opportunity to speak to an audience on your own terms. This is a play by Deloitte Consulting not the audit practice, since Deloitte currently audits none of the top ten global pharmaceutical firms. (PwC wins the prize on that front, auditing five of top ten plus Bayer AG.)

Media organizations co-sponsoring for-profit conferences with companies and executives they cover, and the conflicts that arise, is a hot topic. The New York Times wrote about it on October 27, 2013.

In many ways media outlets are natural partners for live events, because they have access to prominent people in the fields they cover and can promote events through their products at almost no cost. The New Yorker and other publications like Fortune have had successful live events for more than a decade.

Yet when news companies had wide profit margins, many kept the event business at arm’s length, viewing it as an ethical minefield filled with potential conflicts of interest. Many of the headliner names that event planners rely on to drive ticket sales are the same people those journalists cover.

Since then, however, advertising has plummeted. Industrywide 2012 newspaper advertising revenue was $22.3 billion, down nearly 55 percent from 2006 levels, according to the Newspaper Association of America and Huber Research.

In that light, what was once perceived as a liability is now viewed as an advantage. Interviewing specialists onstage is now called “live journalism,” and conference centers are considered just another social platform with Twitter, Facebook and online video.

That’s also what the spokesman for the Financial Times said when I asked about its partnership with Deloitte for the December Pharmaceutical and Biotechnology Conference. He emphasized that the conference is an FT event, held for more than thirty years. Deloitte has been the co-host for the last eight. In the past, he said, sponsors got a free ride. Now they have to pay for the privilege of being associated with the FT. Deloitte’s loyalty to the event has earned it an exclusivity clause. There will be no Deloitte competitors allowed as speakers or sponsors.

Typical sponsor packages for the FT industry conferences run from £37-60 thousand but Deloitte pays “quite a bit more” for the co-hosting privilege and that does not include the firm’s own internal costs. It’s a year-long event, culminating in the conference, that includes private dinners and activities geared towards providing Deloitte professionals with access to high level industry executives. Sponsorship benefits include moderation of panel debates by FT journalists and the fairly straightforward lend-lease of FT brand and access to FT editorial in exchange for money:

What could possibly go wrong? The New York Times, criticized by its own Public Editor for the cozy atmosphere between journalists and the CEOs it covers at its fairly new DealBook conferences, would know. From the October 27 piece, again.

Still, it is easy to get something wrong. The Washington Post faced a wave of criticism in 2009 when it invited lobbyists and industry groups to pay $25,000 or more to sponsor private “salons” at the publisher’s home with Post journalists and government officials. It issued a public apology, and a marketing executive at the center of the plan resigned.

Other blurry areas include who is selected to be on panels. “Sometimes we have the same companies on the list for sponsor and speakers, and sometimes those conversations get merged,” said Julie Hansen, president and chief operating officer of Business Insider, a digital publication, “but you can’t come to us with a fat checkbook and expect to buy your way into an event.”

Deloitte seems to be the Big Four firm most often taking advantage of media organizations hungry for revenue in exchange for abdicating control over content. Its deal with the Wall Street Journal is what got me going on this subject earlier this year. Deloitte was a also gold sponsor of a recent Fortune conference for “powerful women”.

It’s a bit odd but maybe not that surprising many S&P employees are members of the Newspaper Guild, a union. Why do S&P employees belong to a newspaper union? The group’s Facebook page explains that, “Guild members at S&P include analysts, reporters, editors, researchers and administrative staff.”

S&P takes its journalistic connection so seriously the firm recently claimed in defense of a lawsuit that its ratings are an expressions of its First Amendment freedom of the press/free speech rights.

(Let’s hope the Big Four don’t get any crazy ideas. Wait, they already have!)

Standard & Poor’s is asking a California judge to rule that its credit ratings are opinions protected by a state law meant to block lawsuits filed by the powerful to intimidate the weak.

Facing a $1 billion lawsuit by California Attorney General Kamala Harris over its assessments of mortgage-backed securities, the New York-based unit of McGraw Hill Financial Inc. (MHFI) said in court filings that its ratings are similar to newspaper editorials and shielded by a 1992 California statute barring meritless lawsuits intended to bully targets.

“From a free speech perspective, there’s no more dangerous opponent than the state,” Floyd Abrams, S&P’s attorney, said at a hearing today in state court in San Francisco.

PwC also advertises on Forbes—PwC ads would often magically run alongside my columns criticizing its latest litigation— and with American Banker where paid content is mixed in as editorial-like videos.

The paid content debate, whether in print, online or live form, is not new. What’s fairly new, and limited to the two most aggressive Big Four firms, is the use of paid content and exclusive conference co-hosting by public accounting firms to position themselves as consultants again, muddying the waters of their primary role and responsibility and public duty.

Back in early 2009, Forbes launched Forbes Insight. Mediabistro.com described the initiative at the time:

We like this news story: Forbes has just launched “Forbes Insights,” a custom research practice under the Brand Intelligence Group, the group formed last year when the website and print edition merged their sales and marketing people. Forbes Insights, according to veep of marketingchief brand officer of the Brand Intelligence Group Bruce Rogers, is a way to “provide access to our audience”—lots of rich, powerful people read Forbes, and if you want to know what they’re thinking, now you can commission Forbes to do the research, surveys, and whatnot.

“This is a whole new revenue stream for us,” says Rogers. Even though companies interested in these surveys probably already advertise in Forbes, Forbes Insights offers the company a way to access dollars from a different line item on their clients’ budgets. “Often [the groups commissioning the studies] are sales groups that have their own budgets,” Rogers explains.

Deloitte LLP has been a very big user of this Forbes service, commissioning surveys and studies that have been re-reported by other media organizations. Although some media organizations attribute the Forbes Insight relationship to Deloitte Touche Tohmatshu, the international firm, the relationship is actually with Deloitte LLP, the umbrella US firm that houses separate but equal legal entities that are responsible for their own legal liability. The firms under Deloitte LLP are Deloitte & Touche LLP (audit firm), Deloitte Consulting LLP, Deloitte Financial Advisory Services LLP (the one banned by the NY DFS for its work on Standard Chartered) and Deloitte Tax LLP.

Forbes’ Bruce Rogers recently wrote a column featuring an interview with Deloitte’s Chairman without disclosing in the article that Deloitte pays the group he runs to publish its advertorials. In a triple media placement play that would give Mad Men tears of joy, Deloitte’s recent study on strategic risk “conducted on behalf of Deloitte by Forbes Insight” was “reported” on its sponsored page in the Wall Street Journal. Reuters also picked up the PR Newswire story.

Finally, it doesn’t get any more insinuating than this:

The Union by Deloitte 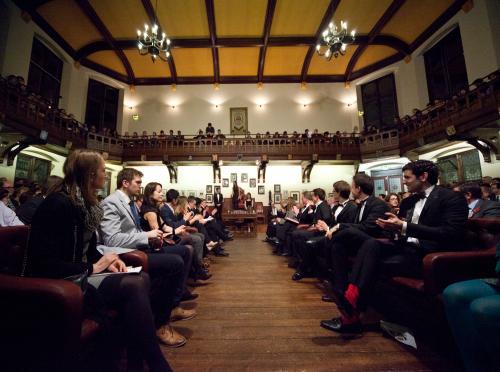 The Cambridge Union Society has entered into a sponsorship deal with professional services firm Deloitte.

Joanna Mobed, President of the Cambridge Union, and Vice-President Alex Porter said in a joint statement to Varsity: “The Cambridge Union Society is very happy to be starting a three-year collaboration with Deloitte, through which Deloitte will be providing the Union with a range of services, including the technical expertise that has already allowed us to overhaul our website and expand our wireless capabilities…

But some Union members have raised concerns about the possible negative effects of the Deloitte sponsorship agreement. Writing to Varsity, Union member Jack Pulman-Slater expressed his dismay at the presence of Deloitte employees at Week Four’s European Union debate. At the debate there was a lack of seating for Union members because of the many seats reserved for Deloitte employees, and there are some reports of disruptive behaviour on their part…

Further concerns have been raised about how the affiliation with Deloitte might affect the Union’s ability to uphold its identity as a society for the promotion of free speech. One Union member who wished to remain anonymous said: “I don’t see how this [the sponsorship affiliation] can’t fundamentally change the nature of the Cambridge Union.

“In any kind of corporate deal of this sort there are tacit understandings about what can and can’t be said about the other party. That just doesn’t bode well for a centuries-old debating society whose tagline has the words ‘free speech’ in it.”

The Union responded: “Deloitte will not be choosing the speakers or debate motions and the Union will remain a society dedicated to free speech, which prioritises its members’ interests.

More Conflicts For The “Independent” Foreclosure Reviews
Running At You – The Much Feared “Shorts”
A Case Study in IT Failure: Marin County v Deloitte Consulting and SAP
Social Media Breakfast Chicago: How To Respond To Critical Bloggers
Remarks at New York University Forum on Non-GAAP Metrics
Communicating in the Time of Facebook: An OpEd By Roopen Roy
5 replies

The “Chilling Effect”: No One Important Wants The Auditor’s... Naming Them: Why Markets Deserve To Know Audit Partner Names And More
Scroll to top