The “dek” for my September 10 Medium.com post reduced my frustration to a testy tagline:

Starved for scoops, many don’t bother to check the veracity of revenue and profitability numbers for non-public and pre-IPO entities before printing them.

This has been going on for a while. Even though I know most print publications still employ fact-checking, I’m seeing more and more major news media and magazine writers plug in numbers, sometimes unattributed, that no one checks.

Every magazine piece I write for Forbes goes through an editor, usually more than one, and fact-checkers. My editor, and the fact-checker, ask me to produce original documentation, not other news stories, to support all of the facts and numbers — audited financial statements, SEC annual reports of enforcement actions, notes and contact information for all sources and quotes, and original court documents. As a CPA and former internal auditor I’m used to backing up my analytical conclusions or statements of “facts” with sufficient evidence. I was glad to see Forbes would not allow me to make a mistake.

Tech journalists, especially, seem intoxicated by access to the non-public numbers that traders would pay a lot to know for sure. Sure, it takes time to track it all down. Sure, if you don’t print what everyone else is saying you miss out on the page views.

But where’s the journalistic integrity?

I suspect some journalists are already being used as cogs, wittingly and unwittingly, in the equity market pump and dump machine.

As accountants, auditors and financial professionals, we know

…that summary level revenue and profitability numbers for public companies, those listed on U.S. stock exchanges, are easily verified. Go to the SEC filings —10-K annual reports, 10-Q quarterly filings, 14A annual proxies, 8-K filings of other legally required to be reported events — to see if what an executive says matches what he or she told regulators and markets in the filed financial statements. Even earnings calls and earnings releases should match what’s eventually filed or executives must later must explain why not.

It bothers me all the time when reporters quote positive non-GAAP metrics as actual results and forget, for example, to point out that a company is actually losing money on a GAAP basis. That’s exactly, sucker, what those companies want you to do.

The worst offenders recently were those that wrote about Facebook, pre-IPO, and Groupon .

The hype before the Facebook IPO is an example of unverified financial information gone wild. When the New York Times broke the story of Goldman Sachs’ investment in Facebook on January 2, 2011 it was obvious a certain segment of the investing population willingly ignored the lack of audited, verifiable, complete financial information when offered a “hot and exclusive” opportunity. The media was more than willing to repeat unaudited, unverified, and often incomplete information in its stories, true or not. Reuters eventually reported that disclosures provided to Goldman Sachs’ chickens, I mean clients, intended to entice them to make a $1 million minimum investment, weren’t even audited results.

I was very disappointed when journalists ate the hype BuzzFeed’s CEO was dishing out about his media company’s results. What was important was to be first not to get it right.

That and $5 will buy you a latte at Starbucks.

What was really disappointing was when the Wall Street Journal reporter attacked me on Twitter for calling out his gullibility. 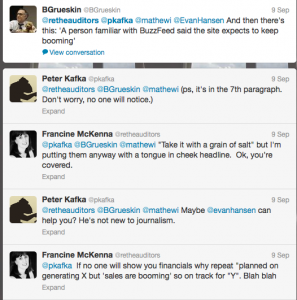 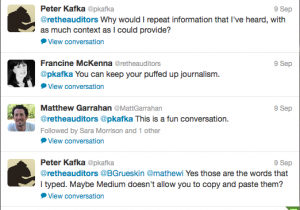 The column also mentions similar unattributed numbers in a New Yorker in a story about MSNBC.  The New Yorker,  you say? Isn’t the New Yorker the gold standard of fact-checking?

Sanneh and the New Yorker did not identify the numbers as estimates nor did they say where they came from because, according to Sanneh, they had been widely disseminated in the industry. The focus of the article was MSNBC’s editorial philosophy not its financial success.

New Yorker magazine is widely considered by journalists, and the schools that produce them, as the gold standard in fact-checking. In September of 2012, Columbia Journalism Review Books and Columbia University Press released The Art of Making Magazines: On Being an Editor and Other Views from the Industry. Chapter five, “Fact-Checking at the New Yorker,” is taken from a lecture delivered by New Yorker fact-checking director Peter Canby on February 28, 2002.

To start checking a nonfiction piece, you begin by consulting the writer about how the piece was put together and using the writer’s sources as well as our own departmental sources. We then essentially take the piece apart and put it back together again. You make sure that the names and dates are right, but then if it is a John McPhee piece, you make sure that the USGS report that he read, he read correctly; or if it is a John le Carré piece, when he says his con man father ran for Parliament in 1950, you make sure that it wasn’t 1949 or 1951…Business journalists are asking readers to trust they’ve done some due diligence before printing non-public financial information. I think those journalists, and their readers, should be more skeptical in the future of what they hear and what they read.

The column captured the attention of those who know and critique the media I’m referring to. One of the first tweets I received in support was from Bill Grueskin, the Dean of Academic Affairs & Professor of Professional Practice at the Columbia University Graduate School of Journalism. 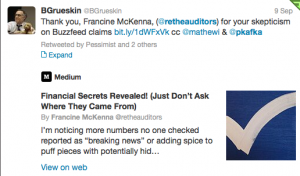 The column also received a mention from the Columbia Journalism Review:

Auditor-turned-journalist Francine McKenna, writing at Medium, has some cautionary advice for journalists on reporting unaudited and unverified financial information.

She points to recent reporting on Buzzfeed’s revenues and profitability, but the problem isn’t limited to nonpublic companies that aren’t required to disclose their numbers. McKenna finds the hallowed New Yorker getting iffy with the facts on Comcast-owned MSNBC.

Read the rest of my column about journalists who trust but don’t verify, Financial Secrets Revealed! (Just Don’t Ask Where They Came From).

Nowhere To Hide: Ernst & Young Looking At More Civil Liability For Lehman Failure
Zynga And Facebook: A Dangerously Close Relationship
Duped By Fake Documents? All In A Day’s Work For Some Journalists
Dysfunctional Couple Update: Facebook and Zynga
Groupon: You Must Have Fallen From The Sky
First Forbes Magazine Feature
2 replies