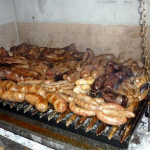 Go here for a text of Commissioner Cox’s speech to the US Chamber of Commerce on April 18th in Washington DC.
I though it was a very detailed and specific speech, given the generally broader and more high-level interests of the mostly pro-business audience.  After almost ten minutes devoted to jokes, stories and compliments paid to the Chamber and its members, he finally got to the meat and potatoes, but it was more of an Argentinean mixed grill.
What are you going to do if you were expecting filet mignon and you’re served instead a sizzling plate full of charcoal grilled offal — organ meats?
They’re smackin’ good, but the average Anglo business Joe just doesn’t appreciate their subtlety…
The speech was focused on three main issues:
1) The SEC’s Office of the Chief Economist upcoming “carefully designed study to collect and analyze extensive “real world” cost and benefit data on the new Auditing Standard 5 and on the SEC’s new guidance for companies.” (Assuming your auditor allows you to implement it…)
2)The SEC’s activities related to adoption of IFRS, including an upcoming formal proposal to International Organization of Securities Commissions (IOSCO) of an updated “roadmap” that lays out a schedule, and appropriate milestones on which the schedule will be conditioned, for continuing the progress that the United States is making in moving to accept IFRS.
3) Following years of evaluation and experience through the SEC’s voluntary XBRL pilot program, the Commission will consider a rule for the use of interactive data by U.S. reporting companies that will parallel efforts already underway in other countries. (Unfortunately, hours after the meeting, the SEC re-scheduled the meeting meant to discuss this program, originally planned for today.)
I was so surprised and pleased by the lengthy discussion of Auditing Standard 5, that I put all other questions aside and asked this:
Commissioner Cox:
Although Auditing Standard 5 is arguably a better, clearer more appropriate guideline than Auditing Standard 2, the integration of the financial audit opinion and the opinion on management’s assessment of internal controls may have had an unintended effect.   Companies that had repeated adverse opinions  on their internal controls and would still be considered deficient in the area because of the number and type of material weaknesses and significant deficiencies are still getting unqualified opinions.  Now that the opinions are combined, there is even less likelihood auditors will single out these issues or issue a qualified opinion on the financial statements because of internal control weaknesses and deficiencies, therefore misleading investors.  We’re talking about companies like GM and GE. What is your reaction to this?
Cox’s response emphasized that the original intention of the Sarbanes-Oxley law was to have an integrated audit and integrated opinion.  Much of the expense everyone but the auditors complained about was for duplicate work and extra effort.  He also emphasized that auditors are expected to give a qualified opinion if it is warranted, without saying when such an opinion under the new rules is warranted or whether those scenarios would be spelled out in more detail in further standards.  Hopefully, he stated, the study being completed by the SEC’s Office of the Chief Economist will shed some light on all the overall costs and benefits of Auditing Standard 5 and Sarbanes-Oxley from an investor point of view.
There were a few other questions, mostly softball ones, and another question asking the SEC to intervene with regard to naked shorts. That’s about the thousandth time I have heard a question or complaint about naked shorts at one of these sessions.  These business people have really got an obsession with the naked stuff, or maybe it’s the shorts part.  Either way, they don’t understand that now that it’s getting hot, they’re going to probably be seeing more of both, and when it’s hot out there, it may justified.
I guess Cox is serious.  They’re starting to arrest people. But was he naked and short?

A Wall Street short-seller on Thursday was charged by the Securities and Exchange Commission with spreading false rumours in a case that suggests regulators are taking a fresh look at behaviour that many companies say is now rampant.

The case, which hinges on rumours about a Blackstone takeover deal, comes as the SEC faces growing pressure to investigate allegations that false rumours about Bear Stearns may have had contributed to its collapse last month…

With regard to liability relief , Financial Week’s Andrew Osterlund said in May of 2007, “SEC chairman Christopher Cox, already under fire for what some critics describe as steering the commission in too business-friendly a direction, may be less willing to take up the issue.”
Mr. Cox: What are your views on liability caps for the Big 4?

In anticipation of his June 25th appearance before Congress’ Financial Services Committee, journalists felt Cox would undoubtedly face questions then about the July 2006 executive compensation rule, which even he has admitted has failed to stem corporate “boilerplate” on executive pay and that he would field questions about why it made sense for the SEC in 2000 to adopt rules on auditor “independence,” but why it does not make sense now to do the same for compensation consultants.
Mr. Cox: What are your views on independence rules for compensation consultants?

In June of 2007, after his appearance in Congress, the Washington Post reported that Chairman Cox told told lawmakers the government “would do its very best to make sure that injured Enron investors receive the full amount of recovery to which they are entitled in our legal system.”
Mr. Cox: Do you still believe the government can help Enron investors receive appropriate recovery given the failure the Supreme Court to rule in favor of the plaintiff’s in Stoneridge?

Mr. Parrett was Global CEO of Deloitte until May 31, 2007 when Jim Quigley succeeded him. But he is still a member of the firm and has not yet retired. He will be a retired partner of Deloitte soon but will still collect benefits (and be interested in their success and profitability) while Deloitte is Blackstone’s auditor.

Mr. Cox: Why isn’t the SEC enforcing its independence rules in such an obvious conflicted situation? Why is Deloitte immune from enforcement?

In July of 2007, Securities and Exchange Commission Chairman Christopher Cox said mortgage servicers may modify individual mortgage loans when a default is reasonably foreseeable without breaking accounting rules.
Mr. Cox, What is your current view on whether it’s still the accountants and the accounting rules that are preventing mortgage services from modifying mortgage loans to help citizens suffering from usurious rate adjustments?

From The Independent Accountant – Will the SEC adopt my “Blankfein Test” and ignore insignificant enforcement actions, like that against the PWC two?

From Jim Peterson at Re: Balance – Ask Cox if he could provide an update to ex-PCAOB chairman William McDonough’s statement of two years ago, that the regulators “didn’t have a clue” what they would do in the event of the failure of another of the Big Four.
Thanks for subscribing to the re: The Auditors feed. Please tell a colleague about the blog. Drop me a line at fmckenna@mckennapartners.com if you have a comment or complaint.
https://francinemckenna.com/wp-content/francine-mckenna.png 0 0 Francine https://francinemckenna.com/wp-content/francine-mckenna.png Francine2008-04-21 18:00:002013-09-13 10:52:04Questioning Cox – Mission Accomplished

A China Fraud Dissected: Part 3 AgFeed’s Trusted Advisors Protiviti and Latham & Watkins
McKenna At Compliance Week Annual Conference 2012
Birds On A Wire: How Do The Firms Get The Word Out?
@Forbes: Forget Everyone Else – Why Aren’t Auditors Answering For Financial Crisis?
MF Global Updates: Forbes, American Banker
Deloitte, HP And Autonomy: You Lose Some But You Win Some More, Much More
6 replies

GE – Will Somebody Please Look Really Hard Under Their Hood? Audit Fees – An Update From Ames Research Group
Scroll to top